What do you know of “The West?” Before moving from Wisconsin to New Mexico, the extent of my knowledge came from playing “The Oregon Trail.” Now, as my time in this area draws to a close, I’ve been reflecting on the region and its ethos. But that’s not what you’re here for, is it? Instead, let’s take a look at an interesting little pocket knife: Quiet Carry’s serendipitously named modern slipjoint, “The West.”

This knife has had a pretty crazy trip. The titanium scales are made in America, with  Taiwanese-ground Bohler D2 sent stateside for assembly in California. From there, this particular The West was shipped south to Pete of Cedric & Ada Gear and Outdoors, Australia’s premier knife reviewer (Don’t tell him I said that). He offered to send it to me once his testing was complete, and I gladly accepted.

Quiet Carry hails The West as “A modern minimal everyday carry knife that is made to last.” The price is set at $109 – a fairly contentious price point, given the popularity of the $115 Benchmade Proper and the $100 Lionsteel Roundhead.

As always, the truth comes out in testing. Let’s see if “The West” can walk quietly and carve a big stick.

It begins with the stats:

The West’s D2 blade wears a satin finish on its drop point hollow grind, with phosphor bronze washers riding alongside. The handles are composed of bead blasted, Grade 5 / 6AL 4V Titanium, with the rest of its hardware made from 416 stainless steel. These are some quality materials, packing quite a bit of value into a relatively compact frame. 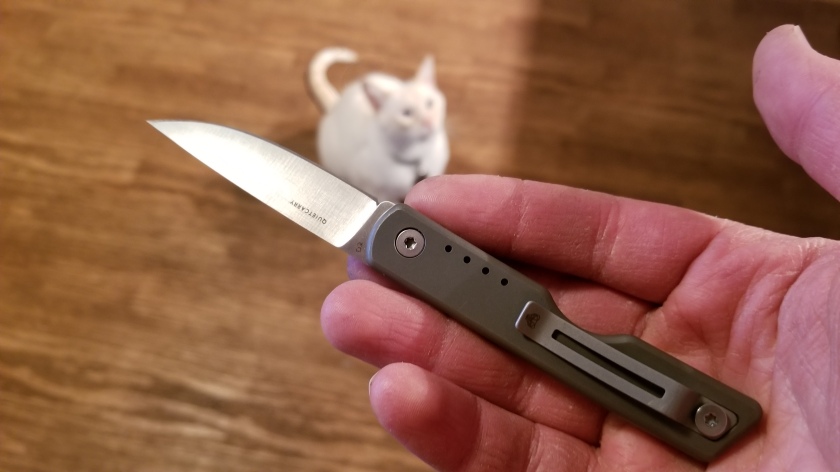 As it turns out, The West is the very definition of “carrying quietly.” It rides effortlessly in your pack or pocket, all but invisible until it’s called to duty. Just take a look at this comparison with the Kizer Begleiter and Spyderco Dragonfly2. 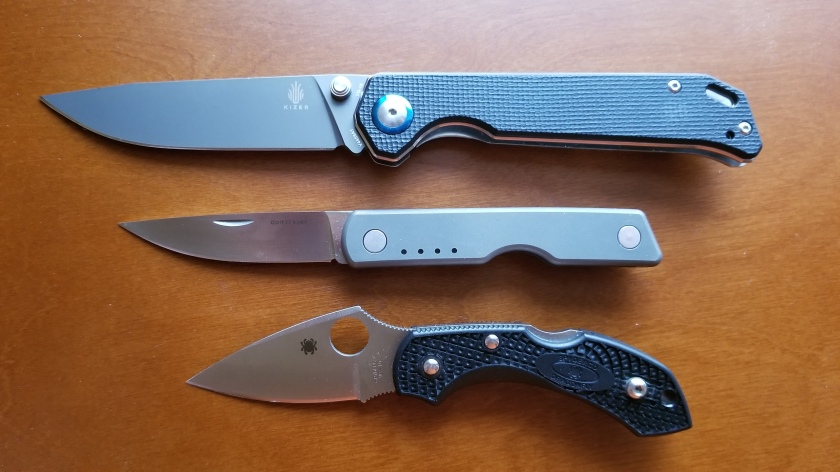 Let’s briefly talk about the logos. Quiet Carry’s signature four-dots are in play, serving as an extension of the modern minimalist design language. There’s also a delightfully etched logo on the clip ramp, which is well done even if it feels slightly out of place. I think they’d be just as well served by focusing solely on the extended ellipses, in keeping with the forward-looking aesthetic.

Ergonomically speaking, this is a surprisingly solid knife. The access cutout for the nail nick provides the perfect resting point for my middle finger, with my thumb resting comfortably at the base of the blade’s broad spine. My hooked index finger sits about three quarters of an inch back from the cutting edge, providing a decent measure of security.

One of the best things about this knife, however, is its disassembly-friendly design. The entire affair is held together with just two T8 torx screws, making it incredibly easy to maintain. Blade centering was good when it came to me, and I had no issues returning it to this state following the takedown and cleaning. 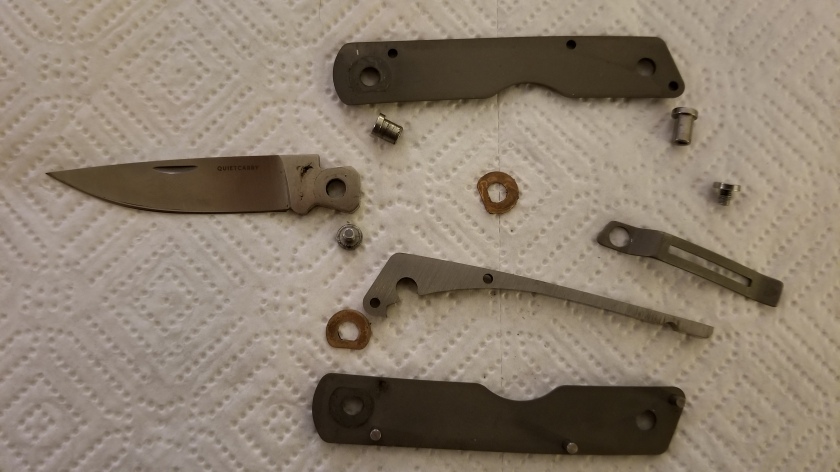 If I had to pick out a single design issue, it’d be this – Do you really want a pocket clip sticking out the side of your khakis? This strikes me as a dressy sort of knife, and I can’t quite bring these two images together. Maybe that’s just me.

Let’s visually compare The West to another “modern traditional,” the Benchmade Proper.

What we have here are two knives with similar use profiles, but each representing a wildly different variation on a theme. Benchmade has cast the Proper as sort of the “Modern-dress Shakespeare” of knives, clothing their design in contemporary yet classic materials.

Quiet Carry, on the other hand, has taken Romeo and Juliet’s “O happy dagger!” and launched it straight to the moon. It’s one of the most futuristic-looking blades I’ve handled, from its minimalist badging to its sleek design.

What’s the first thing you do with a new folding knife? Why, open it, of course. Here’s a recreation of what happened the first time I did exactly that:

Sorry about my hands. I’d been cleaning and cooking.  Anyway, hear that? The sharp snap of The West’s closure immediately prompted a question – Does the blade impact the inside of the backspring? In order to test this, I covered the underside of the interior metal with ink, closed the knife, and did my best to press the blade down while wiggling it slightly back and forth.

Thankfully, I can report that the edge doesn’t appear to come into contact with the rest of the frame. No ink was removed (those little spots were already there), and I heard none of the telltale metal-on-metal scraping one would expect. The loud clack must just be reverberating up the channel between the scales upon closure.

With that out of the way, let’s get back to the good stuff. The West has an excellent light-use blade, perfect for daily chores. It’s an exceptional package and letter opener, thanks to its fine, up-swept tip.

There are a few issues, however. Quiet Carry has seen fit to include a nail nick on only one side, making this a bit challenging to open. I prefer the pinch-and-pull approach, which certainly gets the job done. Still, mirrored nicks would allow for a bit more purchase with sweaty fingers. This also makes me wonder if the D2 blade will discolor around the point at which your fingers make such frequent contact. It hasn’t happened yet, but I wouldn’t be surprised.

Speaking of one-sided things, the clip features just a single position. You’re looking at tip-up, right handed carry, with no options for adjustment. This form-first design will still cater to the majority of users, but it’s certainly something to consider. 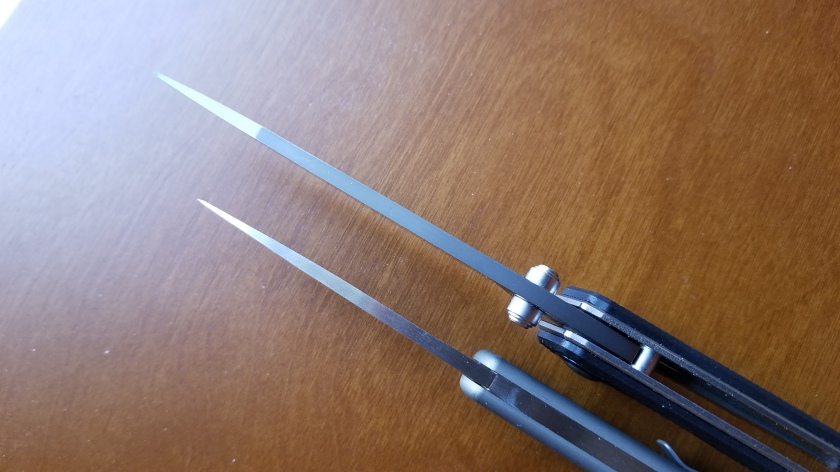 Then there’s the blade width. The West’s stock is actually quite wide, which doesn’t help it when it comes to food slicing. See the photo above? The West’s blade is almost as thick as that of the Kizer Begleiter.

Hold on. Is there a joke in here about Westerners being, shall we say, thick behind the edge? Draw your own conclusions there.  The hollow grind helps but…

Wait a minute. Pete – Are you calling me fat and hollow? Did you ship a knife halfway around the world just to make a joke? Dude, you’re a monster! 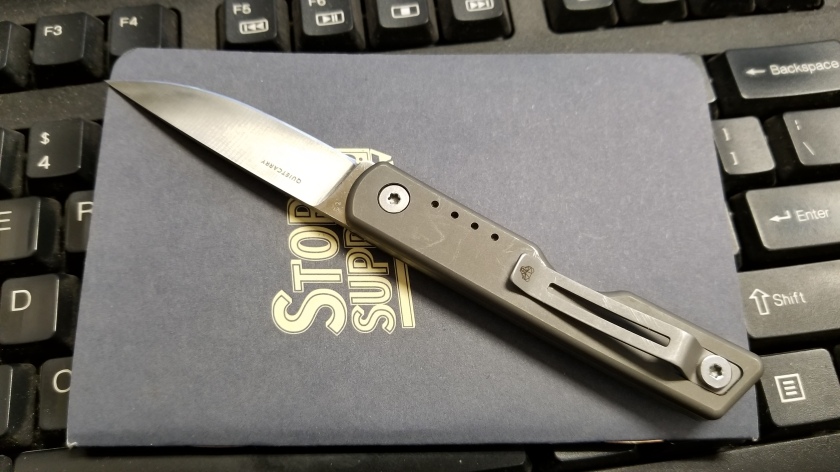 Speaking of Pete, have you seen his Cedric & Ada review yet? He did quite a bit with this little guy. And that was before it made its way to me, out here in (ironically), the American West. My own use was limited to general home and office tasks, nothing to really push the blade to its limits. And so far, it’s performed admirably.

Most of the issues in this category revolve around patina. Both the anodized titanium and D2 steel will certainly show wear, so don’t expect The West to remain pristine for long. The rather delicate curve of the blade also leads me to wonder just how many times it can be re-sharpened while maintaining its attractive profile.

Still, the materials here are solid, and its ease of disassembly and maintenance is a positive. It’s a well-wrought example of a forward-looking design, with a pretty nice ratio of form to function.

Honestly, I don’t have a problem with the price here. Sure, it’d be nice to see a better steel than D2, but it’s not like this is intended as a hard use tool. While the Benchmade Proper’s S30V will hold an edge slightly longer, The West’s D2 will likely be easier to sharpen.

The West’s other materials are equally solid. The titanium siding and springy pocket clip are very nice, and (outside of the hard-close issue), I feel this to be a knife with serious staying power. So long as you close it gently, that is.

This is the modern traditional for the folks who looked at the Benchmade Proper and thought, “Man, I wish it came in titanium.” In many ways, it’s an even more modern modern traditional. Its anodized siding pairs well with the classic D2 steel, creating a design that’s equally interesting to the eye and hand. This is a testament to both its designer and the continued maturation of global manufacturing.

That being said, this isn’t the knife for me. I prefer one-handed opening models for daily carry, with the Proper reserved for dress duty. Still, there’s a solid use case here. If you’re looking for a current, capable small blade, then I’d urge you to follow the advice of John Babsone Lane Soule: “Go West, young man.”