Just how accurate does a watch need to be? If you’re like me, the answer is “As perfect as possible.” But perfection tends to be pricey, and it’s often paired with an aggressive, overwrought design. That’s what makes Casio’s WVA-M640 model so intriguing. Its classic look masks a stunningly modern feature set, without the broad-shouldered bragging found in many contemporary timepieces.

Before proceeding with this review, I’d advise you to head over to YouTube and watch Nick Shabazz’s review of the Casio Oceanus. It’s a $500 watch that offers solar charging, atomic timekeeping, and generally excellent construction. Why am I prefacing a $100 watch review with something far more expensive? Because the M640 offers many of the same features as the Oceanus, with a pricetag of nearly $400 less. Let’s dive in.

Dimensionally speaking, this is one of the smaller watches I’ve owned. Amazon calls out the case measurement at 43mm, but I think this may be an overestimation. The whole affair rises just 13mm from my wrist. This, combined with the contoured sides, allows it to slide quite easily under the cuff.

Rounding out the package is its large mineral crystal, with a water resistant rating of 100 meters. It’s slightly domed, adding to the organic contours of the timepiece. The three interface buttons are nicely recessed, keeping sharp edges to a minimum. Under the dome, the indices are nicely and symmetrically applied. I especially appreciate the doubled lines at 12 o’clock. The Waveceptor font is subtle and unobtrusive, as are the “Multi-Band 6” and “Tough Solar” just above the digital display.

One of the most interesting features of this watch lies in the bracelet. While most metal bands require a trip to the jewelers in order to remove links, Casio includes a small tool that lets you perform the job for yourself. That’s some good stuff, maynard. (Forgive my momentary digression. Sometimes the background music takes over.)

Anyway, this small, studded piece of plastic fits into the back of each link, allowing you to easily size the bracelet to your wrist. This isn’t a perfect system, however. The relative thinness of the band feels a little flimsy, despite its stainless steel construction. It hasn’t failed on me, and the clasp itself appears strong enough. But if there’s a weak point, I feel this is it. Imagine how great it would be if a higher-end manufacturer perfected a similar approach. Oh, well. At least I’m not dealing with hollow end links.

The other letdown here lies in the plastic layer sandwiched between the front and back of the case. It’s an odd design choice, adding a bit of a low-rent feel to an otherwise strong aesthetic. And what’s with the 10-60 numerals around the bezel? Of all the markings that could have gone here, why would Casio choose the seconds? It’s not completely unattractive, but it certainly feels a little out of place.

Overall, I still like the design of this watch. It’s got some perplexing quirks, but nothing that inherently limits its function. The case’s low profile serves it well on the jobsite, and the mineral crystal has yet to show any major scratches. The unfortunate use of plastic and the bezel etching hurt the score, as does the toy-like quality of the bracelet.

First and foremost, the M640 is a superlative timekeeper. Its atomic radio sync performs flawlessly, receiving a signal each day in my rather rural (translation: empty and boring) portion of New Mexico. It even synced up during an overnight trip to the San Juan National Forest. That’s pretty cool, given that both cell phone and radio reception were practically non-existent.

This gives the Casio a level of accuracy unmatched by the rest of my watches. It’s the master by which I set and test each new timepiece that comes in for review. Combined with its effortless solar charging, this makes it a perfect set-and-forget accessory.

Let’s talk about the lume. The M640’s applied indices feature a moderate coating, with bright metal surrounds and beveled edges. The hour and minute hands are likewise lumed, apart from their skeletonized bases. The compound charges quickly and emits a pleasing green glow. How long does it last? Well, we’ll say a bit longer than the Casio Duro. But here’s where the M640 pulls out another party trick.

Yes – a solar powered watch with a manual light. I have it set to remain active for three seconds following a press of the Illuminator button, but you can modify this setting to a momentary-on.

Other features include a world timer, city code display, five alarms, and the standard DST, stopwatch, and timer gimmicks you’d expect from a digital Casio. The full auto calendar is particularly nice. I generally have the digital display set to the day and date, cycling through the other options on an as-needed basis. The user interface is seamless and easy once you’ve mastered the buttons.

Here’s where we come to the lone weakness of the M640’s function. Take a look at the photo above, showing an angled view of the digital display. Hard to read, right? This blurring occurs whenever the watch is pointed away from your eye. It’s easy to correct by tilting it toward you, but there is some mild annoyance here.

Overall, this watch is incredibly easy to use. The screen distortion and middling lume hurt it a bit, but the M640 is otherwise flawlessly functional.

While I may have my qualms about the bracelet, I have nothing but good things to say about the M640’s durability. This has been one of my primary construction site watches, and the crystal has held up remarkably well. There are some small scuffs, sure, but nothing so pronounced as the scratches that emerged on my Orient Mako 2 and the Wenger Urban Metropolitan.

Casio’s warranty, however, leaves something to be desired. Their website states that timepieces are guaranteed to be “free from defects of quality at the time of delivery for a period of one year from the date of purchase… During the warranty period, and upon proof of purchase, the product will be repaired using CASIO reconditioned replacement parts or the product will be replaced with the same or a similar reconditioned replacement model within a reasonable period of time.” 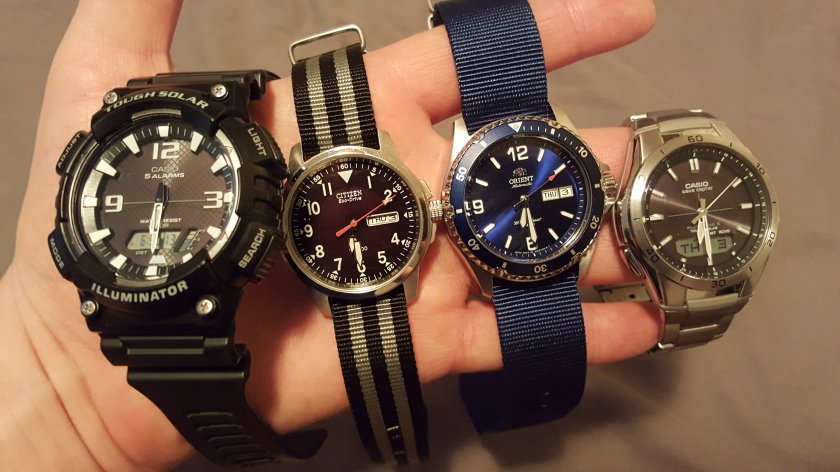 So, there you have it. The watch itself seems to be durable and well constructed, but the mega-manufacturer legalese leaves me a little cold. And because this is a grey market watch, I’m not sure what they’ll cover. If you’re really worried about the warranty, purchasing from Casio’s official website is probably the best bet. Otherwise, be sure to save your Amazon receipt.

Here’s where things get very, very tricky. When I purchased the watch shown here, I paid $91 at Amazon. When I went back to research this review, I found it available through just three sellers with prices ranging from $112 to $144. That’s a pretty significant fluctuation.

A check of Casio’s official website yielded an even more disappointing result. Yes, you can get it, but you’re going to pay $160 before shipping. That’s far more than I’d be willing to spend on this particular watch. They do offer a rubber-banded model (with a very attractive red second hand) for $140, but even this is pushing the envelope.

So, where does that leave us? For the sake of scoring, I’ll base my conclusions off the lowest current price at Amazon. Your $112 buys solar charging, atomic timekeeping, decent lume (plus a backlight), self-service bracelet links, and a generally professional look. Unfortunately, this uptick in price means that you’re also paying more for a partial-plastic case and middling quality bracelet. At $90, this is a nearly perfect watch. At over $100, it falls a few notches.

UPDATE: The watch is available for $90 at Target.com.

Absence, as they say, makes the heart grow fonder. I recently sent this watch off to another reviewer, with the caveat that I’d probably want it returned once he was finished. And, to my surprise, I miss the M640 more than I thought I would. It’s an excellent timekeeper wrapped in a pleasing design, despite a few perplexing quirks.

If you’re after atomic-level accuracy and solar charging but don’t like the overbuilt look of Casio’s G-Shock line, the M640 is a solid choice. It’s a low maintenance, well constructed watch with plenty of crossover appeal. Just be sure you don’t pay too much for it.