The CRKT Batum is a big, dumb, partially-trained Black Lab that lives in your pocket. It’s huge and rough around the edges, but it loves you so, so much. You can’t even be mad at it when it misbehaves. You just shake your head and smile, wagging a finger and telling it to center its blade, stop dropping open, get off the couch, or whatever. It’s a knife that, in spite of its flaws, you can’t help but like. Here’s how it fared in the wild.

Full disclosure: CRKT sent this knife as a promotional sample. They’ve been great folks to deal with, even with some of my past criticisms.

Curious about the name? I know I was. CRKT’s website clears this up, stating that this knife is “purpose-built for the desolate terrain near Batum, Denmark, and raring to combat anything that you could find anywhere else.” Fair enough. On to the dimensions:

As you can see, this is one chubby puppy. The thick, drop point blade features a flat grind along its satin finish. The spine is unbevelled above the thumb hole, though they’ve cut intersecting swedges into the forward section. Blade centering isn’t great. It won’t rub against the sides, but I wasn’t able to bring it to the middle without effecting the action.

A G-10 scale covers the show side, with stonewashed stainless steel on the opposite. CRKT has added an over-travel to the lockbar, as well as a pocket clip for tip-up or tip-down carry. The backspacer features a large lanyard hole while maintaining the design’s muscular lines.

As with most CRKT’s, the Batum swings on thick, teflon-like washers. There are three of them, actually – the two sandwiching the blade, and another beneath the pivot on the G-10 side of the handle. I’m not sure what the last one is for. Maybe it gives prominence to the shiny, metal pivot? Whatever the reason, it serves its purpose unobtrusively.

The biggest flaw in the Batum’s form is this – It’s too sharp. No, not on the blade, but on the G-10 edges, the front of the thumb hole, and especially along the lockbar cutout. I seriously think you could cut things with that strip of steel once the blade is locked into place. Why they rounded off the top and bottom of the metal handle but neglected the midsection is beyond me.

Once you get past the rough spots, however, this knife is actually quite comfortable to operate. We’ll go into ergonomic details below, but I’m generally pleased with the design on the finger-friendly front.

Let’s start with what I like about this knife. As mentioned above, the ergonomics are excellent. It fits sublimely in my hand, with the forward finger choil providing an almost pistol-style grip. It’s rock-solid during cutting tasks, with your thumb resting atop the broad-shouldered blade. The uniquely-shaped thumb hole is well placed and features surprisingly decent chamfering around the primary points of contact. This is certainly a flickable knife, with either the thumb or middle finger.

Cutting performance is solid, though not exceptional. Food prep with the Batum was more of an ordeal than a pleasure, and I gave up after one onion and half of a tomato. The blade is just too thick for delicate cutting of soft materials. It did, however, perform surprisingly well as a woods blade. I managed to feather and shave some sticks with its factory edge, and even did some very light batoning. I cut that portion of the test short, however, after the knife developed significant side-to-side blade play. This was before taking down and reassembling it with blue LocTite on the pivot. It may perform better now, but I’ll let sleeping dogs lie. I can say that the 8Cr13MoV steel performed better than expected in the field, showing no signs of chipping or other damage. Soft steels have their place in outdoor applications, and that seems to be the Batum’s bag. 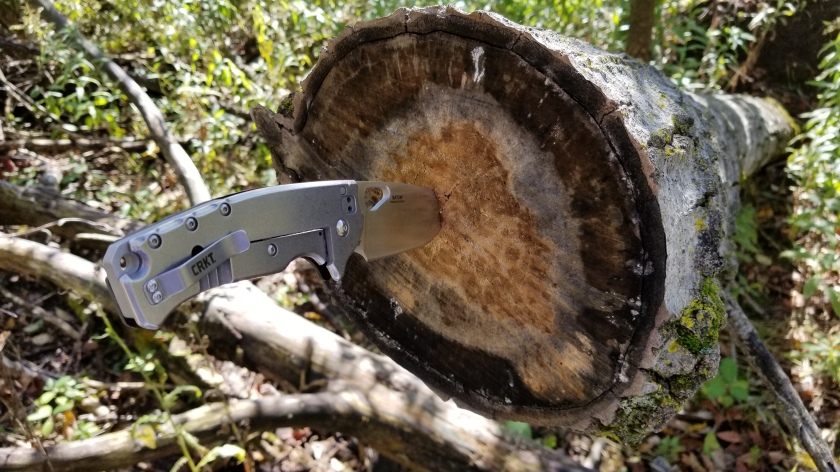 For such a thick knife, the Batum rides surprisingly well in the pocket. Maybe this is a consequence of its deep-carry clip or its relatively broad sides. But for daily carry, I was shocked at just how well this behemoth rode at my side. 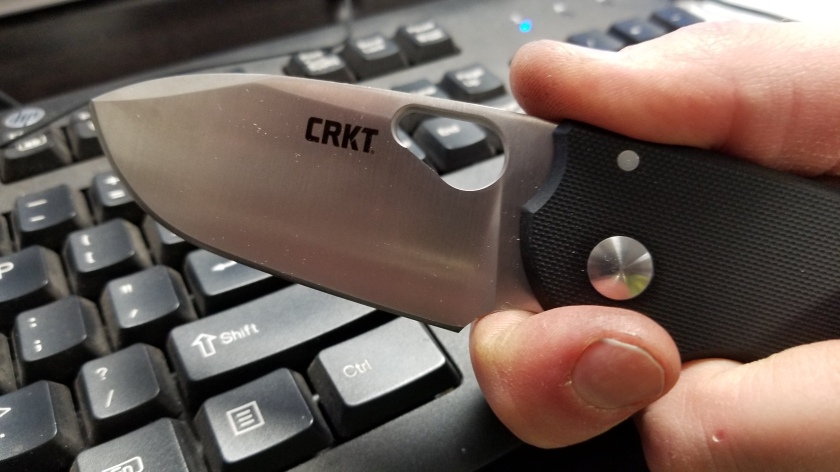 The locking mechanism here is well done, for the most part. The framelock snaps into place with a friendly bark, like a dog begging you to throw a ball. But then you see that your canine friend has a gimpy back leg and decide to give it a soft toss rather than really chucking it. What does that mean, you ask? Take a look at the width of metal at the base of the lock bar. 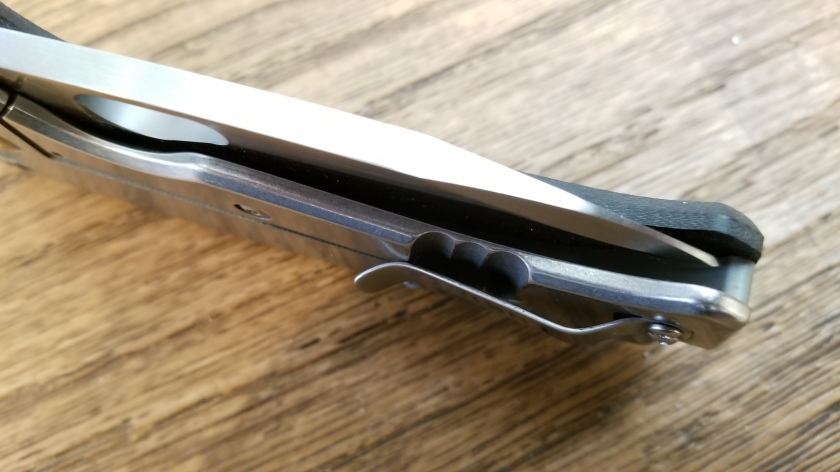 That’s… pretty thin. For such a beefy folder, I’m surprised that CRKT milled out so much material. So even though the lockup itself is strong, the delicacy here gives me paws… I mean, pause.

Remember that flickable deployment? Well, there’s another way to open the Batum. Here it is, about halfway through the clip below.

Woof. The detent on this knife is simply not that great. Part of this is due to the massive nature of its blade, but this opens easier than the WE 706 I reviewed a few months back. True, it’s kind of fun to shake this guy open. Just be mindful of the legal restriction and company you’re keeping before you give this pooch the paw.

More troublesome by far is the relatively poor hardware holding this thing together. I know we’re dropping back into “Form” a bit, but hear me out. During the disassembly process, two things became immediately clear. First, it seems this knife was put together with pretty cheap screws. I stripped not one, not two, but three fasteners along the backspacer. Even with all the care and tricks I’ve learned from other teardowns (hairdryers, swapping bits, etc.), this knife simply refused to come apart. I did manage to get it cleaned out and put back together, but I’m pretty disappointed with the stripping. I consider this to be a functional issue, since it affects the way the pieces of the tool work together. If you’re not the kind of person who enjoys taking down your knives, this won’t be a problem. For me, it was a bummer.

Still, I’m quite pleased with the functional side of this knife. It’s tough enough for medium-duty camp tasks, and it’ll resharpen quickly in the field. It also gets a little extra bump for the elusive “fun factor.” There’s just something about the solid grip and thick blade that make it a pleasure to use.

CRKT offers a Limited Lifetime Warranty, which is good for “as long as you own your knife. Coverage ends if you sell or otherwise transfer the knife to someone else, or if your CRKT® knife is modified in any way.” This doesn’t appear to explicitly prohibit disassembly, which is rather surprising for a budget brand.

Coverage aside, there’s a fair amount of good here. The blade is thick and sturdy, and the overall construction is rather solid. My biggest concern comes from the thin lock bar base and the iffy screws. But if you stick to medium-duty tasks and aren’t into taking your knives apart, the Batam should give you years of service. 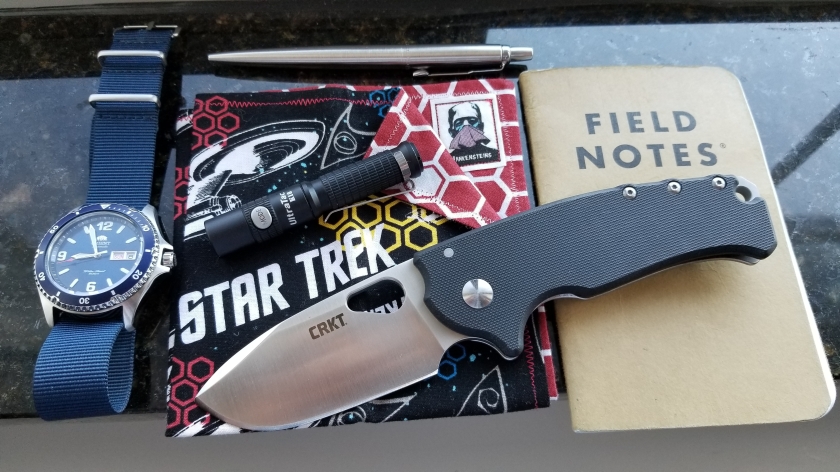 Believe it or not, I’m going to give the Batum a pretty good score on the financial front. For $35, it’s a great way to get a feel for the style of design ace Jesper Voxnaes. You’re getting good ergonomics, thick construction, and a massive chunk of (admittedly inferior) blade steel.

However, there are several superior options at or near this price point. Take the Ontario RAT-1 for instance, with its excellent reputation and D2 steel. You’re also within $10 of the Steel Will Cutjack, featuring a flipper tab and, again, D2. Seeing a pattern here, CRKT?

Part of this boils down to your intended use. Would I recommend this as an everyday blade? No. It takes up a lot of pocket space and the steel dulls too quickly. But as a weekend warrior or outdoor toy? Oh, you bet.

Look – I like this knife a lot. It’s large, generally comfy, and just so much darn fun. I’m left wishing for better screws and steel, but the design alone has made this piece worth my while. If you’re curious about the Batum, I’d say, “Get it.” But just like buying a large, goofy dog, know what you’re getting into first.

And hey, CRKT? I’m begging you – Look into upgrading your steel. We can get S35VN for $35 now. VG-10 and D2 are all in the same ballpark. You already do a great thing by providing budget-friendly renditions of custom designs. But that’s only half of the equation. Invest in the quality of your product, and I think you’ll find the high-end knife community investing in you.