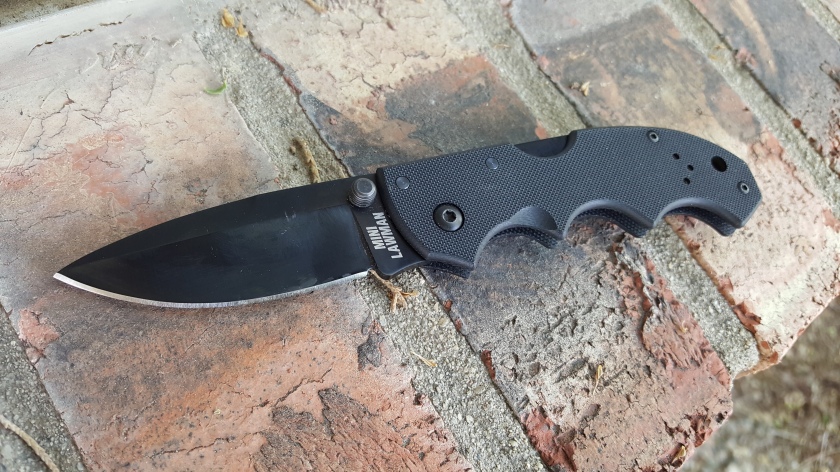 While some knife manufacturers may fear being typecast by the market, there’s something to be said for knowing your role. Few companies have embraced this idea as well as Cold Steel, who recently offered to send me a sample of their compact tactical folder, the Mini Lawman.

To paraphrase another famous lawman, “Go ahead, Cold Steel. Make my day.”

Cold Steel and designer Andrew Demko had some pretty clear objectives with the Mini Lawman. In many ways, it’s the epitome of the “little big knife” genre. Its 2.5-inch drop point blade is crafted from CTS-XHP steel, featuring a hollow grind above its plain edge. The 3.875-inch handle is cut with three deep finger grips, and there’s a small curve where the blade matches the front of its G-10 siding. This can be used as a finger choil, so long as your hands are smallish. For me, the knife was most comfortable with my index finger curled aft of the pivot. Grip was good overall, though some jimping along the top of the blade would be a welcome addition.

This is a very lightweight knife, with just 2.6-ounces distributed over a 6.375-inch frame. The blade itself is just 0.12-inches thick, which greatly benefits its ability as a slicer. The handle measures a third of an inch across, adding to the svelte appearance. Its slender nature means those with larger hands will have to bear down in order to keep a secure grip. When I tried this, I noticed some give in the G-10 side scales. It’s not catastrophic since this isn’t a linerlock, but it does detract from the Mini’s otherwise solid feel.

Both the pocket clip and thumb stud are reversible, making this a truly ambidextrous knife. Carry is tip-up only, which shouldn’t represent much of an issue. 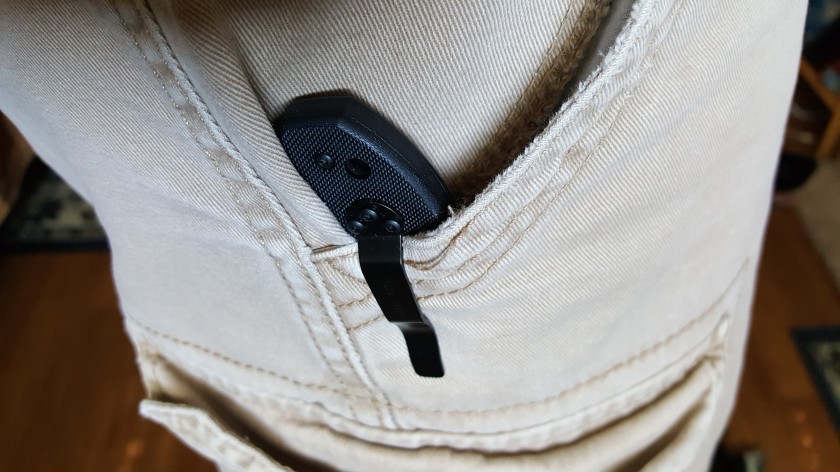 Let’s touch further on the pocket clip. I’m not a fan, to be blunt. Due to the position of the lanyard hole, Cold Steel has positioned the clip almost three-quarters of an inch below the tail end of the knife. This leaves very little to the imagination. No one is going to look at your pocket and think, “Gee, I wonder what that is.” As Cold Steel themselves told me, their brand doesn’t really do things subtly. And hey, that’s fine for some applications. But for walking around the office, it’s a little off-putting.

There is another design choice, however, which will keep the Mini Lawman out of some circles – the DLC black coated blade. Now, I know this model is aimed at law enforcement. In that sense, it’s probably a good choice. But in an EDC context, it adds a note of unwanted danger to an otherwise un-scary knife. If Cold Steel were to offer this model with a satin blade, I think they’d suddenly find a new group of people willing to put this in their pockets.

While I’m giving this something of a middling Form score, it’s actually gone up since my first impression. A little time in the hand has smoothed out a few of the G-10 edges, and the action benefited greatly from disassembly and oiling. Speaking of which, this knife was an absolute pleasure to take down.

Cold Steel has even included metal liners on either side of the backspacer. Nice touch, guys. They’ve also included an incredibly thin Teflon washer atop each of the phosphor bronze ones, to the benefit of the knife’s action. These details really endeared the knife to me in an unexpected way. So, better than I initially thought.

Let’s start with the action. Cold Steel’s Tri-Ad lock is known to be a little stiff out of the box, an issue I previously experience with their Finn Wolf. Fortunately, the Mini Lawman’s mechanism was fairly smooth upon arrival and (as mentioned above) it got even better with the application of a little Nano Oil. The snap of the lockback upon deployment is truly satisfying. With the lock button depressed, the blade descends with a slight shake of the wrist. The position of the forward choil also inspires a lot of confidence. So long as I keep my index finger in the first handle cutout, the sharpened portion of the blade cannot contact my skin. Instead, the choil drops reassuringly over my knuckle. I was able to dial this action in even further during disassembly, without adding a hint of blade play. The slight handle flex bothers me a little, but the metal portion of this knife is rock solid.

The Mini Lawman performs admirably as a cutting tool. While I didn’t perform any Cold Steel style torture tests, I did manage to open packages, cut paper, and break down boxes with this little guy. I also used it to trim some paracord and shave off some thin slices from a piece of firewood. No complaints here, except to add to my earlier gripe about the DLC black – It shows smudges and cutting debris pretty readily.

We talked above about the position of the pocket clip. This is the highest-riding knife I own, probably by about half an inch. But there’s an interesting consequence here – the knife is very easy to retrieve from your pocket while wearing work gloves. That’s no small feat, especially considering the thinness of its case.

Overall, this is a fine jobsite knife, especially taking the CTS-XHP steel into account. Add in the reliability of its Axis Lock and its decent ergos and you’ve got a pretty compelling piece.

Cold Steel offers a solid warranty, which you can read about on their website. In short, it covers “defects in workmanship and materials,” though they do note that “ANY knife can be broken or damaged if subjected to sufficient abuse and that ALL knives eventually wear out (just like your boots) and must be replaced.” Since they don’t list an exact term of coverage, I’ll just go ahead and assume it’s good for a couple years.

I mentioned disassembly above, but I’d like to touch on it again here. The Mini Lawman was an absolute joy to take down, which I really didn’t expect. So, if you’re fond of cleaning and oiling your knives, this will be a fun one to maintain.

My lone concern (again) is the G-10 handle. Its slightly malleable nature makes me nervous, which does affect the score. 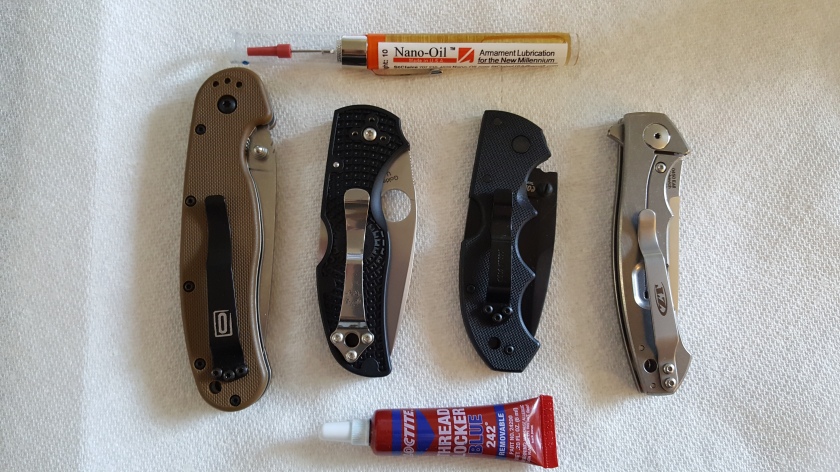 Depending on where you buy, the Mini Lawman generally retails for between $75 and $80. I feel that this is a little high for a knife with a slightly squishy handle. If Cold Steel could fix the flex problem (difficult without including steel liners, I know), I’d be giving this a much higher score. That being said, I do like the action, the lock, and the CTS-XHP steel. But that’s a little higher than I’m comfortable with.

Your situation could be different. Say, if you’re a member of the military or law enforcement. In that case, I think this is a fine backup blade for daily use, and I’d say the price point isn’t too far off target. It’s certainly a vast upgrade from the gas station items Smith & Wesson tries to pass off as police models.

In the end, I’d say I’m two-for-two on Cold Steel products. Both the Finn Wolf and the Mini Lawman have outperformed my expectations, despite a couple of nagging flaws. Would I recommend this knife? Sure, if you’re in the market for a tactically-styled compact backup or EDC. For office use? Not so much. But to be fair, Cold Steel isn’t really a white collar brand.

Still, I’d love to see a version of this knife with a satin blade. As mentioned above, I think it could open up a new market for them. Until then, this is still a good knife. But with a clean blade and a solid handle, it could be a great knife.