Since its initial public offering, the Kershaw Dividend has created quite the market buzz. Its intriguing design, solid flipping action, and American pedigree have many in the knife community screaming “Buy!” But is it a passing fad, or a worthy addition to your portfolio? Here’s my analysis. And, I promise, I’m just about done with the stock puns.

The Dividend has a lot going for it here. Designed and built in the USA, the “1812” model goes so far as to feature an American flag on the side of the blade. It’s an attractive addition, and one that will put it over the top with a lot of buyers. This, of course, is a reference to the War of 1812, wherein the dastardly Brits set fire to the White House and attempted to cut off American naval trade.

But, I’m a gear reviewer, not a historical critic. Back to business.

Speaking of cutting, the Dividend’s blade is a 3-inch Wharncliffe design, featuring a hollow grind and a thickness of 0.09-inches. Its stonewash finish descends to a plain edge, ending in a very, very fine tip. The steel? Kershaw’s 420HC, the first such example I’ve owned. So far, it’s tackled all of the (admittedly easy) tasks I’ve set it up against. 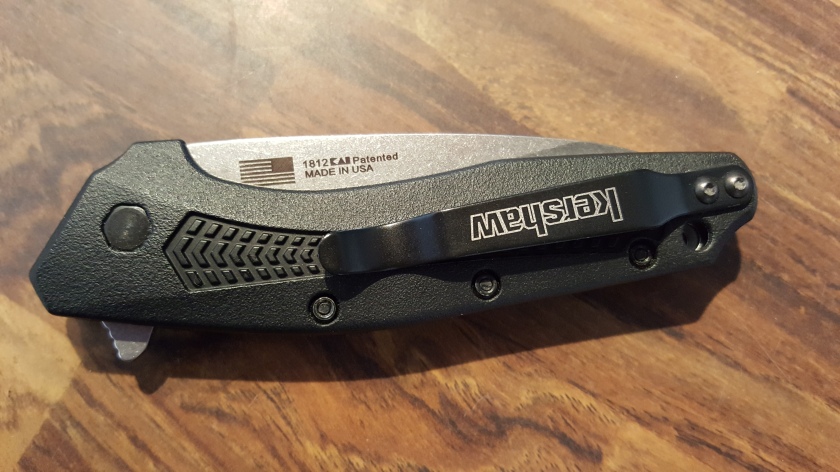 More construction notes – Unlike some other knives at this price point, the Dividend swings on phosphor bronze washers. Kudos to Kershaw for skipping the Teflon. They’ve also included full stainless steel liners (kind of necessary with the SpeedSafe), plus a reversible tip-up pocket clip. The captive pivot is a nice touch, perhaps borrowed from KAI’s Zero Tolerance line.

The ergonomics on this knife are wonderful. The flipper tab is nicely jimped, not too sharp, and just large enough to serve as a finger guard once the blade is deployed. While I opted for the GFN-handled version, Kershaw does offer one with aluminum siding. Without the added metal, my Dividend weights in at just 2.85-ounces. This avoids one of the big problems with the last Kershaw in my collection, the too-heavy Cryo. Closed, the knife measures 4.25-inches – perfect for my medium grip. A bit of additional jimping on top of the blade would help, but the overall feel is quite good.

So, where does the Dividend stumble? There’s the pocket clip, for one. I’m not a fan of the lanyard hole and vertical screw arrangement. This design causes the knife to ride fairly high in the pocket, revealing just a bit more than I like in casual company. But, more on my preferred usage later. Another somewhat related issue stems from the shape of the blade. While the tip is certainly elegant, I have no doubt that it’ll break off without too much provocation. Definitely more of a slicer than a stabber.

Lastly, there’s the liner lock. As shown in the photo, the leaf only slides over 30% of the blade tang. Could it break in after a while? Sure. But for now, it’s not quite enough security for me.

The Dividend excels as a slicer. Just look at that onion – drawn and quartered without the slightest hesitation. The length of its cutting surface is great for food prep, and the not-quite finger choil at the tail of the blade helps keep debris out of the pivot mechanism. The 420HC steel has also proven to be more than a match for cardboard, paper, and packaging materials. So far, I’ve had no need to upgrade from the factory edge.

As with many of Kershaw’s budget knives, the Dividend is equipped with a SpeedSafe assist. Normally, this would be a drawback when it comes to disassembling the knife (or, more specifically, putting it back together). But you know what? I’ve taken this guy down twice, and it’s given me no issues. Sure, it helps that I’ve learned on other Kershaws, but the Dividend is constructed in such a way that it goes back together fairly simply. 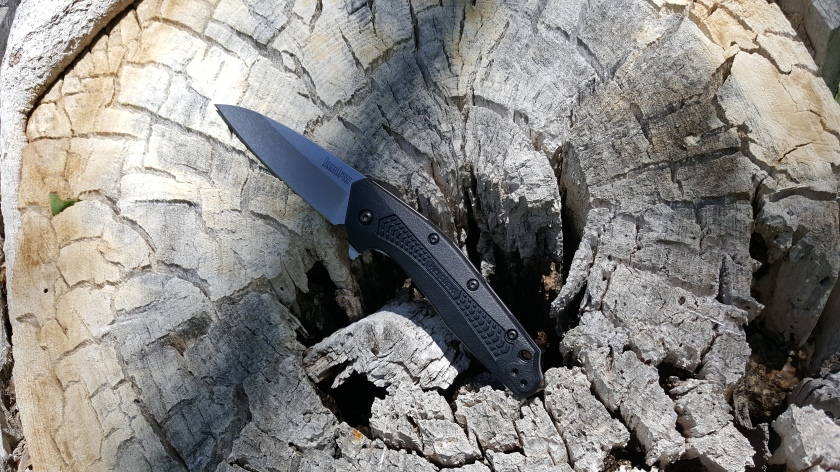 Alright. After all these positives, I’ve got something to get off my chest – I don’t trust this knife. More specifically, I don’t trust it for my particular, peculiar situation. See, I work on a construction site in the middle of the desert. Two thirds of my day is passed in an improvised office, with the remaining hours spent out in the field. Some days, I don’t need my knife at all. But there are times, infrequent though they may be, that I require a medium-to-hard use tool immediately. So, I’ve got weird requirements for my EDC knives. They need to be small, light, and non-threatening enough to carry in an office environment, while still being capable of slicing through a heavy fall-protection harness or (in very rare cases) being kicked through a pallet. Weird, I know. And while the Dividend meets all of my office specs, its lockup and blade are just too delicate for heavy duty use.

In fairness, this isn’t a heavy duty design, so I’m not going to hold that against it. On weekends, it’s hard to kick the Dividend out my pocket. Its comfortable ride and lightweight package are perfect for casual dinners, hanging out around the grill, or generally any pursuit that involves cargo shorts. It’s a nice instrument, just not something I want when the going gets rough. 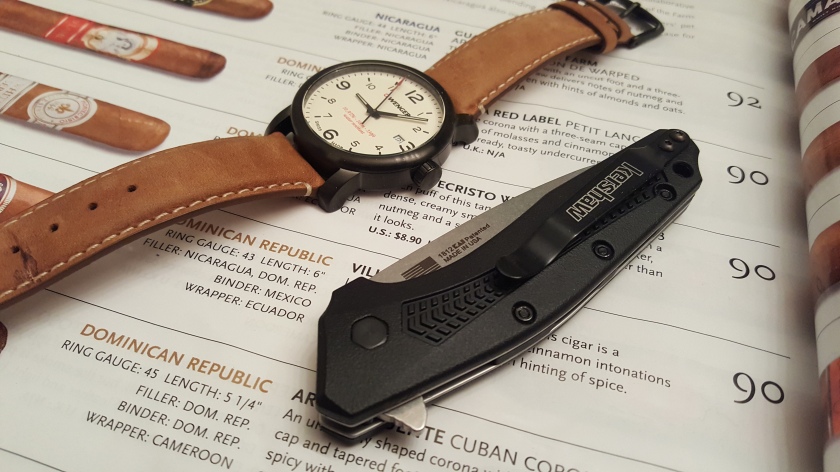 Used in the proper fashion, this knife should pay… dividends… to its buyers for years to come. Kershaw offers a Lifetime Limited Warranty, covering manufacturing defects and materials. They’ll also sharpen your knife for free, so long as you’re willing to pay for postage. As far as I could see, disassembly doesn’t void your warranty. This means that you can take the knife down worry-free.

The blade tip, again, is a… point… of concern. That being said, Kershaw will send you a new one for just $10, which seems like a reasonable sum.

The Dividend’s market price currently sits around $35. This puts it above such stalwarts as the Ontario RAT II, but just under such casual competition as the Spyderco Dragonfly. Each of these features a different blade steel, the best of which is almost certainly the Dragonfly’s VG-10. And while AUS-8 is not a paragon of toughness and edge retention, in this case it’s “the devil you know” to the Dividend’s “the devil you don’t.”

Still, this knife has a lot going for it – good action, attractive design, and solid ergonomics. This is pretty much as good as you’ll get from a Kershaw budget blade. The warranty and ease of maintenance are nothing to sneeze at, either. And don’t forget, this little guy is made in the good ol’ US-of-A. Every time I see the flag on the side of the blade, well, it counts for a little something.

So, should you buy a Kershaw Dividend? Yes, yes you should. It’s a wonderful light-duty tool, with surprisingly good execution for a knife at this price point. And, really, how many choices are there when it comes to American-made budget blades? I’m willing to support just about any company that can produce something that’s just as attractive in its form and function as it is in its finance.

More of this, please, Kershaw. I’m a big fan.