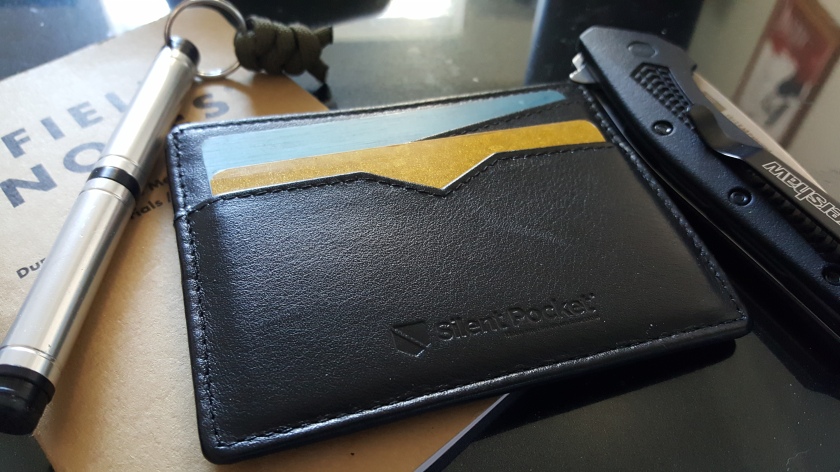 A good wallet is perhaps the most overlooked component of a strong EDC loadout. But as the war between privacy and technology heats up, a company called Silent Pocket has begun producing elegant wallets capable of shielding our private data.  They were kind enough to send over a sample of their Simple Card Wallet, a minimalist affair designed to keep your personal info where it belongs – in your pocket. 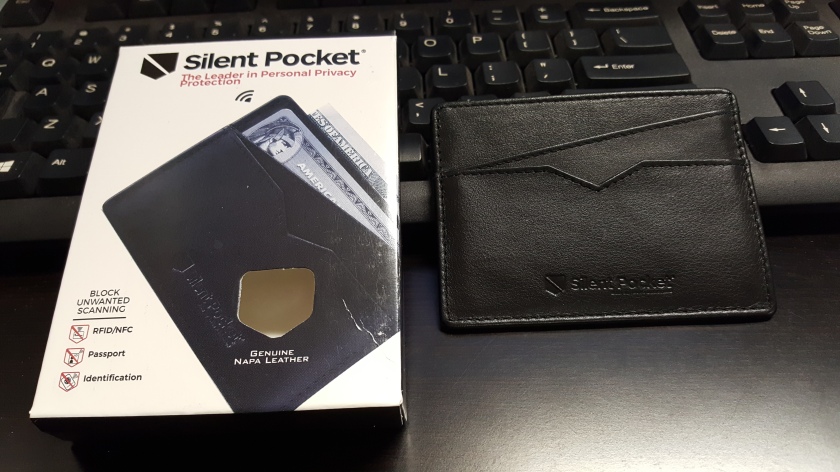 While this wallet may be “Simple” in name, the design is surprisingly complex. Perimeter measurements are 3.9-inches by 3-inches, with a weight of 0.7-ounces. The wallet is constructed of “Genuine Napa Top Grain Leather,” wrapped around its RFID/NFC blocking internals. While Silent Pocket is understandably coy about the makeup of their shielding, its presence adds a slight crinkling sensation to the wallet when flexed. It’s not bad and, like the leather itself, the insulation will likely wear in over time.

There are five pockets in total – Two on the front, two on the back, and one in the center for storing cash. Out of the box, I had no issue fitting six cards and several bills in the wallet’s various compartments. With a little break-in time, I suspect it could accommodate several more cards. But I like to travel fairly light, and the Simple Card Wallet holds everything I need. Even fully loaded, it never got much wider than a quarter of an inch. 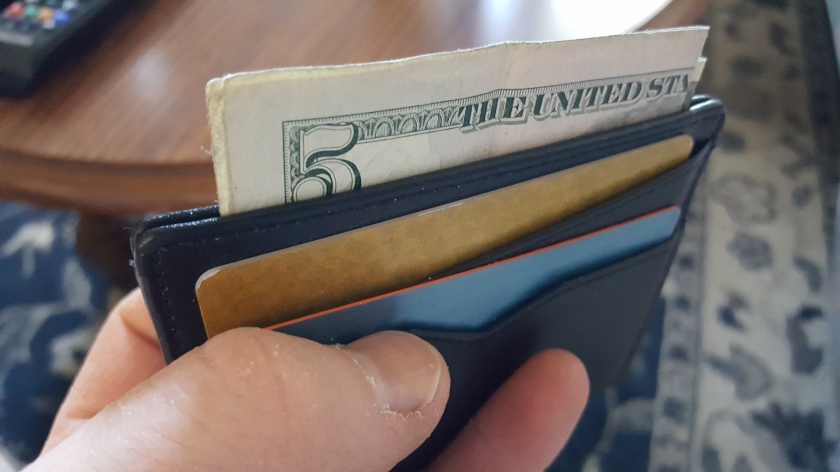 A few more cosmetic and design notes. While I can tell you what the wallet is made of, words can’t quite describe the feel of Silent Pocket. Its leather is smooth, supple, and very pleasant in the hand. The branding is tastefully placed, with the company logo on one corner and the brand name plus logo on the reverse. The stitching is solid, and there are no sharp, plastic edges to catch your finger. Lastly, I really appreciate the different pocket cuts. Whereas the back features straight lines, the front of the wallet has a diagonal line for the top pocket and a beveled line at the bottom. This allows you to access cards from slightly different angles, which is a really nice feature. ID cards are usually slick, while credit and debit cards generally have raised letters and numbers, so it’s good to see someone paying attention to their different storage needs. 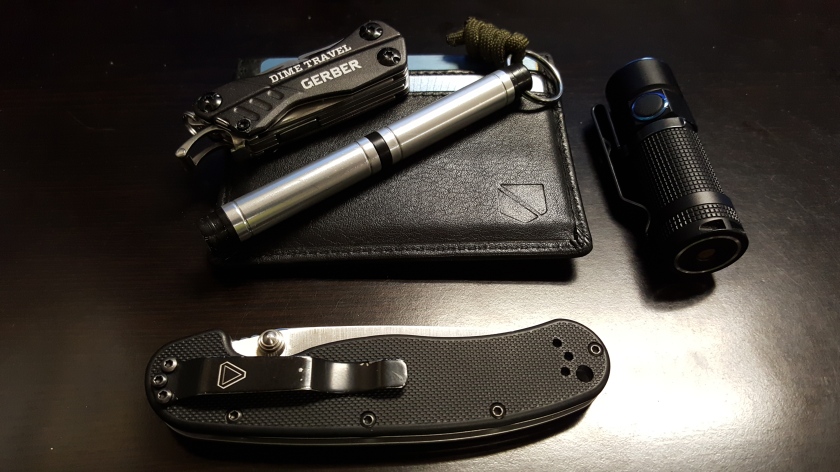 As a minimalist device, the Simple Card Wallet fills its role admirably. Its thin profile and excellent construction make it a ghostly delight to carry. Removing and stowing cards is relatively simple, but remember that the more items you add, the harder it will be to retrieve just one at a time. But with several pockets to choose from, I didn’t find this to be an issue.

Let’s talk about the Silent Pocket’s party trick. The company claims that their proprietary shielding will block both RFID (Radio-frequency Identification) and NFC (Near Field Communication) signals. These are commonly used wireless protocols, employed in electronics and chip readers. The Simple Card Wallet blocks out these signals at 125 KHz and 12.56 MHz. 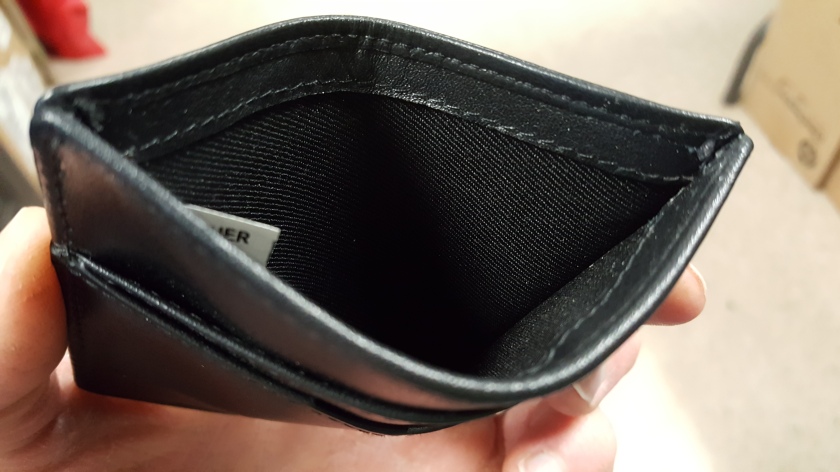 While I don’t have any specialized equipment to verify these claims, I did manage to improvise a test of my own. My day job requires the use of RFID keycards for entry, exit, and access to certain areas of the jobsite. After removing all of my other items from the wallet, I stowed my ID badge in the center pocket. And guess what? No matter how many times I waved it in front of the reader, the Silent Pocket prevented my card from being read. Not an exhaustive test, perhaps, but certainly a conclusive one.

So, I’m giving this a perfect score for Function. Take that with the caveat that, as I said, I don’t have the capability of testing every bit of Silent Pocket’s security claims. But in my limited experiment, it passed with flying colors. 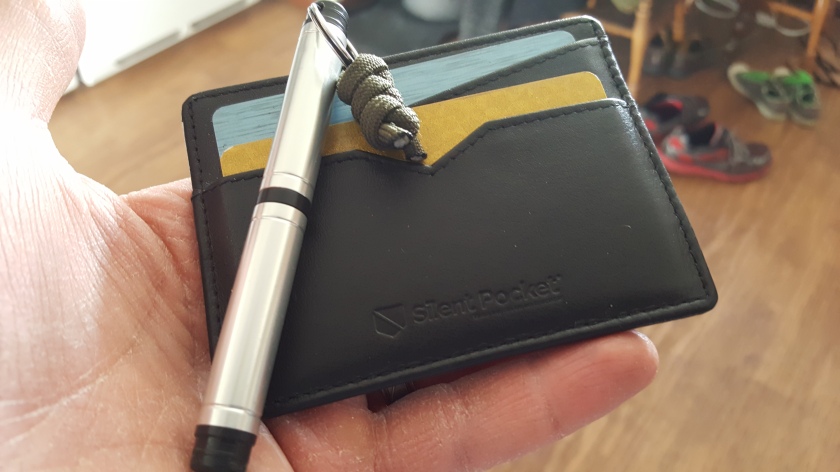 On their site, Silent Pocket states that their products “when cared for properly and under normal use are under warranty for 1 year.” That’s not bad, considering the amount of abuse most wallets take over the course of a year. The leather and stitching on the Simple Card Wallet are very good, and I have no doubt about its lifespan.

But let’s talk about the future in general, rather than just the future of this particular wallet. As technology marches on, protecting our personal data will become more and more important. Personally, I think we already put a little too much of ourselves out there. So when a company like Silent Pocket comes along, offering a stylish, well made wallet that’ll also help keep my financial info safe, I think they deserve some attention. 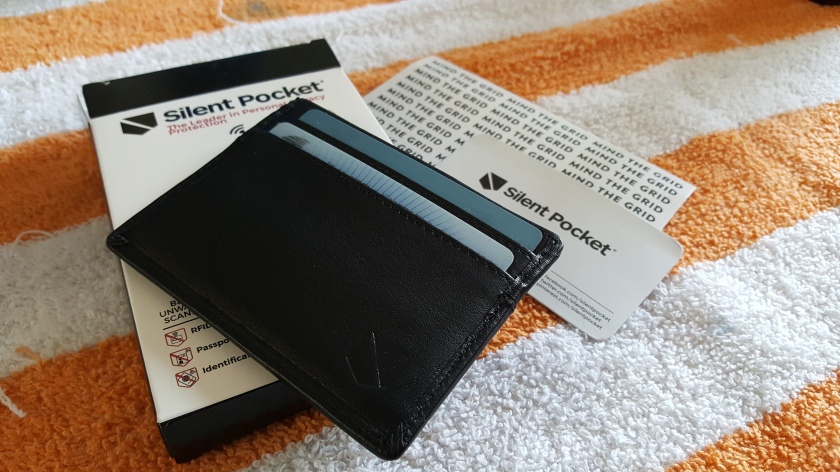 So, the price. Yes, there are lots of cheaper minimalist wallets on the market, but none of them have felt quite this nice. And sure, there are more expensive wallets that claim to offer the same security. But at $30, I think Silent Pocket hit the sweet spot with their Simple Card Wallet.

Maybe a quick comparison will help illustrate the point. For the past several months, my EDC wallet has been the Hitch and Timber EDC Card Caddy. It’s a handmade, crafted-to-order wallet with slots for a pen and multi-tool, and I absolutely love it. The leather is wonderful and the utility is unmatched. At roughly half the price, I figured there’d be no way the Silent Pocket could compete. But I was wrong. I really, really like the Simple Card Wallet. So much so, in fact, that I’m willing to go through the hassle of switching out my cards and cash every few days, just so it can get some pocket time. Its quality construction and peace of mind make it a genuine pleasure to carry. That’s not something I think I’d say about a sub-$15 Herschel. 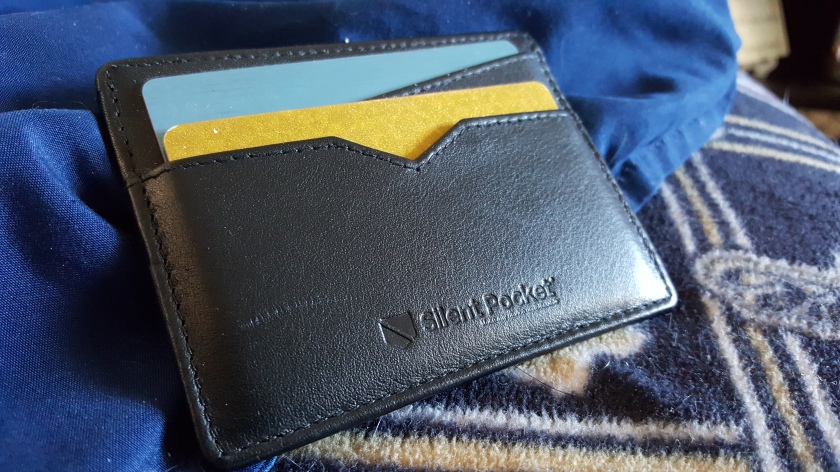 Holy cow! Journeywind Junk’s first ever perfect score goes to the Silent Pocket Simple Card Wallet. For such a seemingly simple piece of gear, it checks a lot of interesting boxes. It’s a minimalist, privacy-centric piece featuring solid construction and the ability to carry cash. That’s a pretty impressive mandate.

So, if you’re in the market for a new wallet, I’d highly recommend this little guy from Silent Pocket. It’s a great option for EDC enthusiasts, security nuts, and even the fashion conscious (or unconscious) among us.