Since its introduction in 1963, Seiko’s 5 Series has produced some incredible watches. Touted for their affordability and automatic movement, these timepieces have made their way onto legions of loyal wrists. The most popular model is the Seiko SNK809. It’s become almost ubiquitous in the EDC community, rivaled only by Timex’s ever-present Weekender. I spent months (yes, months) with the SNK809, and I’m prepared to reveal my findings. Here goes.

The Seiko SNK809 is a looker. While its styling may not please everyone, I find the dial-within-a-dial layout of its minutes and hours to be very appealing. The large digits stand out from the black face, and the “SEIKO 5” emblem provides an attractive touch. The day/date window is logically placed at the 3 o’clock position, and its numerals are clearly readable. I also enjoy the “AUTOMATIC 21 JEWELS” text placed in tiny letters above 6 o’clock. Hardlex crystal covers the face, providing better than expected scratch resistance.

The sweeping second hand is gorgeous. Its graceful path across the dial is immediately captivating, especially for those used to the rigid twitch of cheaper quartz watches. The red tip is especially attractive.

Things get more interesting when you flip the watch over.  There, behind a clear window, users will be treated to a view of the SNK809’s internal workings. All of this is enclosed in a stainless steel case. Seiko’s made some odd choices as to which surfaces are polished (between the lugs and on the case back) and which are not (everywhere else), but the overall finish is quite nice. 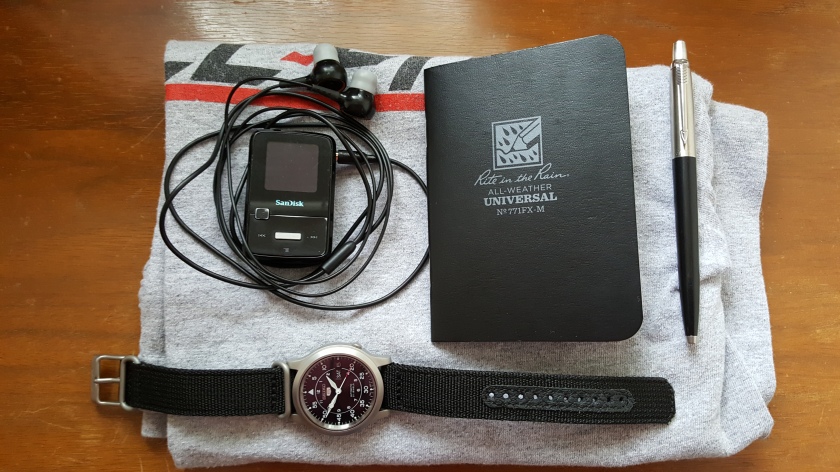 Let’s talk briefly about the stock canvas strap. It sucks. The fabric is scratchy, and mine started to unravel after a few weeks of wear. Most folks swap it for a Nato strap or leather band matching the stock 18mm measurements. I chose the latter and, let me say, this is the most comfortable watch I own. Part of this also stems from the SNK809’s diminutive size. The watch measures 37mm across and rises just 11mm from the wrist. The crown is small enough to remain out of the way, pushed in near the 4 o’clock mark.

All told, the SNK809 is a good looking watch. It loses points due to some odd polishing decisions and a nasty strap, but it’s a remarkably ergonomic design overall. 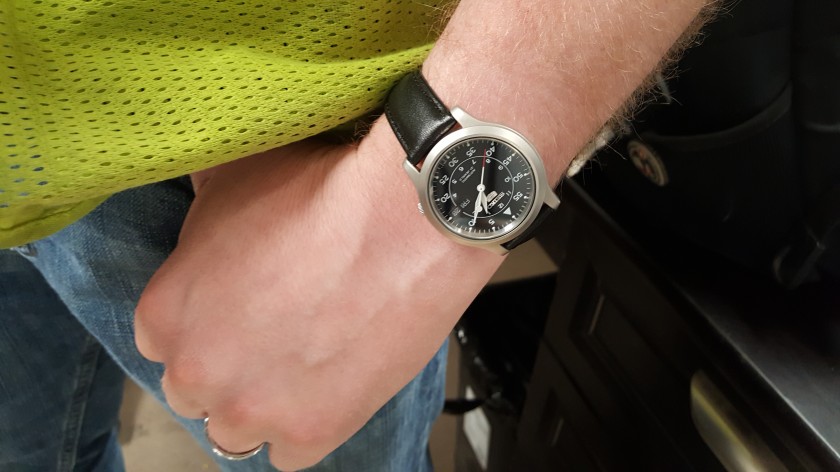 Think that’s too harsh? My SNK809 loses twenty seconds per day. And I’m far from the only one with this problem. That is harsh. Every time I wear the watch, I have a choice – reset to the correct time by stopping the second hand, or wait three days. At that point, the twenty second losses will have added up to a full sixty, allowing me to simply bump it forward by a minute. This tidbit of tedium has kept the watch off my wrist more days than I’d care to count. But, if I don’t wear it, the power reserve runs out and I’m right back in the same place. 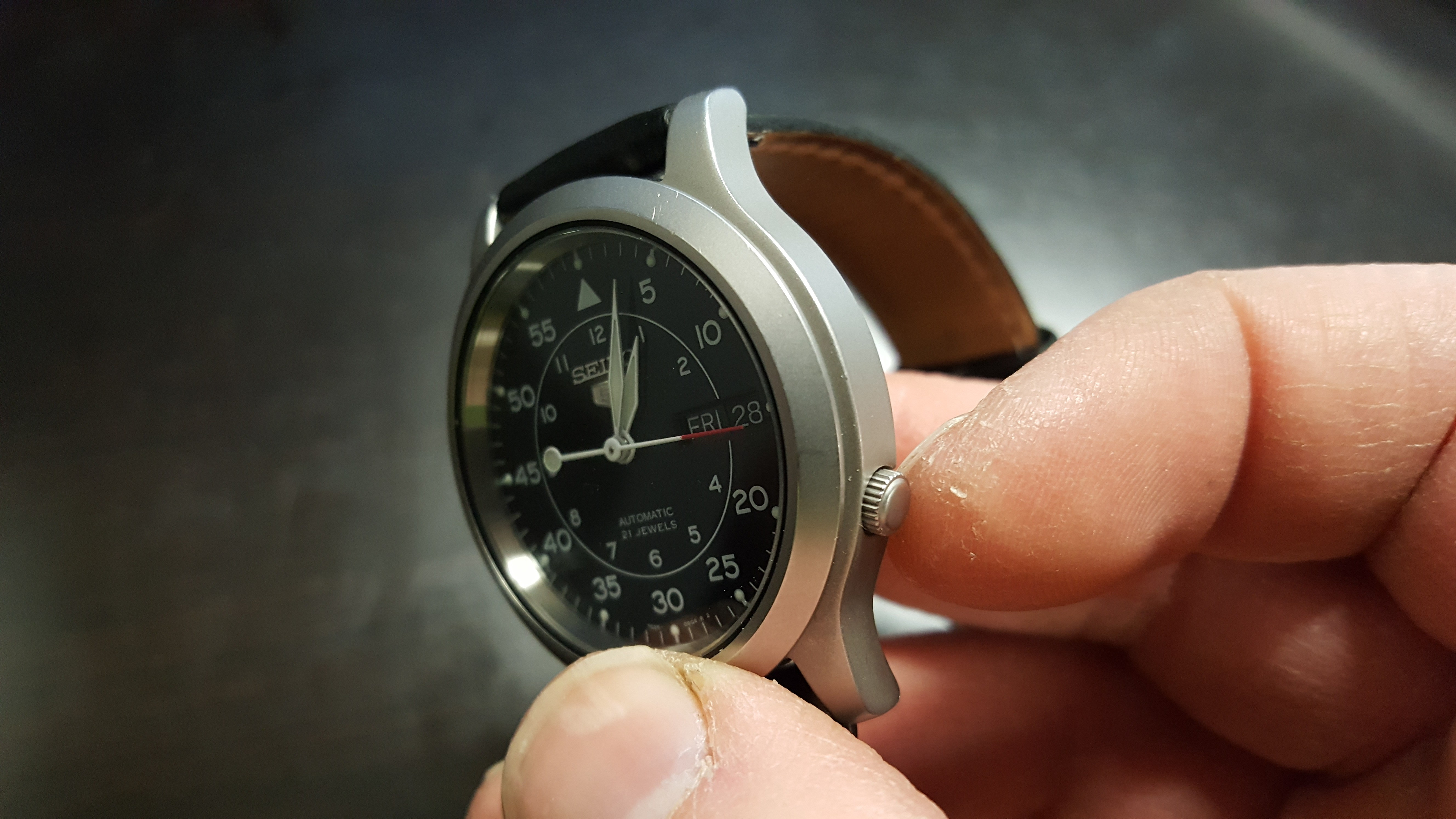 On the positive side, the day/date feature is very nice. It’s easy to set, and the option to switch between English and Spanish day names is a pleasant surprise. And on shorter months, I’ve been able to correct the date without affecting the primary timekeeping. There’s also the power reserve, which seems to last for the as-advertised 40 hours.

Water resistance? To be honest, I didn’t have much occasion to test it. The switch to a leather strap ruled out showering or swimming, though I can report it’s shown no ill effects from the occasion splash at the sink. I have no reason to doubt its 30-meter claim.

But then there’s the lume. When it works, the neon green glow from the watch’s hands and face is truly attractive. But, at least on my model, the light fades after five minutes. That rules it out as a camping or nighttime companion.

Think about the functions this watch claims to fill – Accurate timekeeping, day/date tracking, and moderate illumination in the dark. It does exactly one of those things well, with the lume and accuracy falling by the wayside. No matter how taken I am with the watch’s form, I can’t help but feel let down by its function.

The movement powering the SNK809 is the venerable Seiko Caliber 7S26. These watches are assembled in Malaysia, so don’t be fooled by a seller claiming Japanese movement. I’ve seen this referred to as a “bulletproof” design in some places, and I can confirm that my watch reliably lost 20 seconds per day. So, the flaw appears to be in the design itself, not in the device’s construction. Should any issues arise, Seiko offers a 3-Year Limited Warranty. But here’s the thing – I don’t see anyone keeping the SNK809 for three years. Or at least, not anyone who’s been bitten by the gear collecting bug. If you insist on second to second accuracy in your timepiece, the constant tedium of the setting process will have you looking elsewhere sooner rather than later.

That being said, I do plan to keep the SNK809 around. It will live in my drawer, held in reserve for the times when I need a battery-free watch.

Here’s where things get even more subjective.  For less than $20, there are hundreds of other watches that will absolutely clobber the Seiko SNK809 in terms of accuracy. Quartz watches are a dime a dozen, and they generally keep time better than all but the most high-end mechanicals.

But, at about $55, you’re getting an entirely different experience. The SNK809 is attractive, comfortable, and just so damn cool. It’s got gears, levers, and springs instead of boring old buttons and LCD displays. Sure, it’s inaccurate, but it’s reliably inaccurate. Would I buy another if this one broke? Hell, no. But I wouldn’t feel that I’d been cheated out of my money, either. 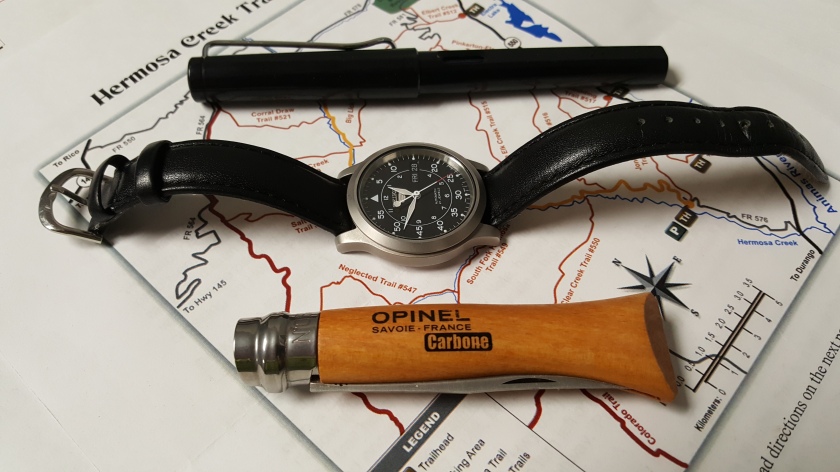 Writing this review was a lot like composing a “Dear John” letter. I normally test gear for a few weeks or perhaps a month before compiling my thoughts. But with the SNK809, the relationship dragged on and on and on. Only now, when I’m ready to make an upgrade, have I come to terms with my feelings for this watch.

The SNK809 grabbed me in a way few pieces of EDC gear have managed to. Could this be due to its mechanical nature? Maybe because it’s a moving, beating thing with a tiny metal pulse of its own? For many, that’s the allure of a mechanical watch. I know it was for me. There’s just something about the knowledge that, every time you swing your arm, the little marvel on your wrist is turning your movement into energy.

For this reason, I would still recommend this watch. It’s true – If you’re curious about mechanical movement, this is a good place to start. You’ll learn about the joys and pitfalls of wearing a tiny bundle of springs on your wrist. Just be aware of the limitations imposed by this particular design.