The Timex Weekender – A fixture in the timepiece community, this popular watch is worn by legions of people all around the globe. Amazon alone features nearly 5,000 consumer reviews of the product line, and forums everywhere crow about its combination of simplicity and style. So when Timex agreed to send one our way, we were anxious to strap it to our wrists. Could it live up to the hype? We spent a week with the Weekender in order to find out.

One of the big selling points of the Weekender lies in its versatility. Shoppers will find themselves faced with a wide variety of choices in face and band colors, all centering on a 38 millimeter, unisex style case. While the watch back is crafted from stainless steel, the rest of the case is constructed of brass and features a polished, silver-tone finish. This is topped with a flat, mineral glass crystal, resulting in an overall thickness of just 9 millimeters. The crystal on our test model is not quite flush mounted, though it doesn’t protrude enough to scratch or catch on other surfaces. 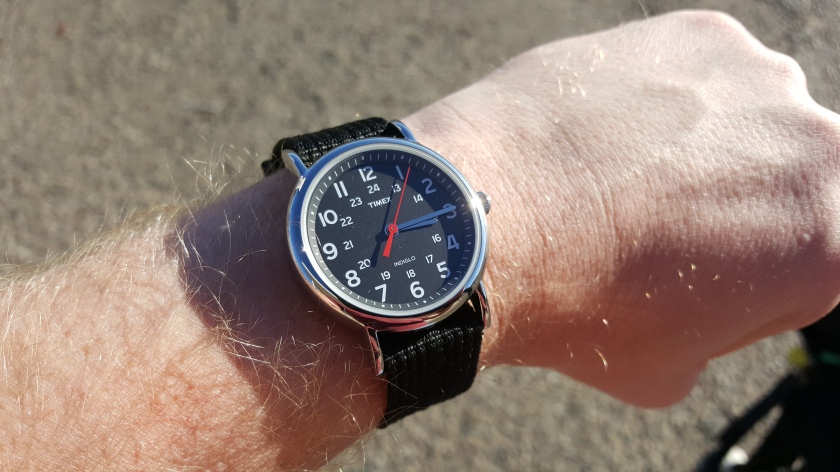 The hour and minute hands are of a bright chrome color, while the steady-ticking second hand is a prominent, pleasing red. Our particular test model sported a black face and white Arabic markings. Timex advertises the Weekender as a 24 hour watch and, indeed, there are additional digits printed just below the usual one through twelve. The crown, which doubles as the backlight activator, is prominent, well notched, and easy to use.

Let’s talk about the band. Constructed of woven nylon, it is, without a doubt, the softest band we’ve ever worn. Combined with the light weight of the watch itself, it vaults the Weekender to the top of our own personal list of comfortable timepieces. The buckle holes, however, appear to be very loosely finished. Our most used opening has already begun to fray, as the picture above shows. This is our largest concern on the Form front.

These watches are incredibly popular, band quality aside. Even so, it took a while for the Weekender to win us over. Don’t get us wrong – The watch looks good out of the box, and we experienced no issues with its basic mechanics. But after a month of sporting a Seiko 5 Series (another popular budget watch), it took us a few days to readjust to the Timex’s minimalist nature.

What finally won us over? In a word, again, versatility. We wore the Weekender with dress shirts, t-shirts, sweaters, and workout clothes, and never once did it feel out of place. Its straightforward form works as well in the office as it does in the gym, on the trail, or on the couch. While we worry about the band and pine for a date window, we feel it’s safe to say that Timex has designed a modern classic.

Before we focus on what the Weekender is, let’s take a moment to consider the things it is not – A chronograph, an alarm, a calendar, or a media player. You won’t be checking text messages or playing MP3s. What it is is a watch, and it excels at being a watch. It’s also comfortable, easy to set, and (thanks to Indiglo) highly usable in low light situations.

Here’s another thing the Weekender is – Loud. While this is a popular complaint among user reviews, we weren’t prepared for quite how audible its movement really was. Easily discernable in an office setting, the progression of the second hand is even louder when resting your head against your palm or driving, especially in a car with good sound insulation. That being said, it seems to be more of an issue at certain angles to the ear. We experienced a similar noise issue with our Expedition Scout, though not quite to this degree. We can also say that, placed on a bedside table, it wasn’t loud enough to interfere with a regular night’s sleep.

Still, one could look at its decibel output as a testament to the Timex’s robust mechanism. We experienced relatively little time loss over our week with the watch, perhaps a second or two. And, while we missed the ability to check the date with a glance at our wrist, the lack of a calendar function eliminates the need to reset the watch on shorter months.

In short, the Weekender fulfills all of the requirements of a minimalist wristwatch. We just wish it was a little quieter about it. 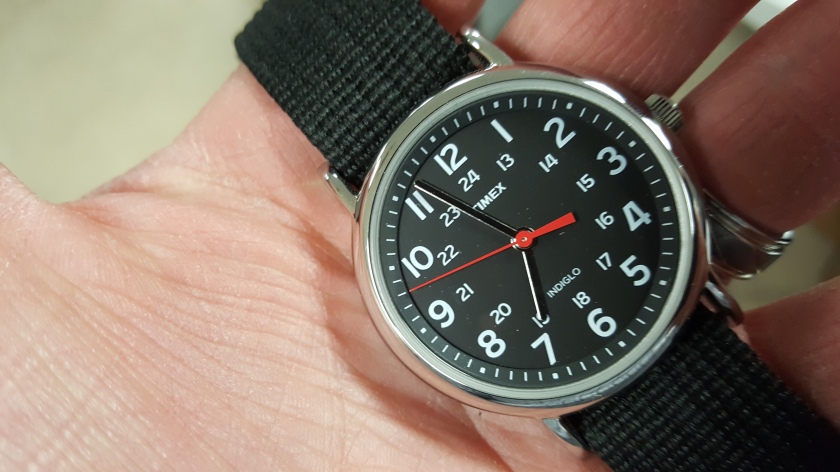 Despite our issues with its cousin, the Expedition Scout, we have high hopes for the Weekender’s durability. It will spend a large portion of its life as a gym and field watch, so we’ll report back if any problems arise. True, we have doubts about the band. But it’s so comfortable that we don’t plan on replacing it until forced to do so.

There’s also the matter of the shiny, silver-tone finish. While ours has yet to scuff, we have doubts as to its long term ability to repel scratches. Again, extended use will tell the tale. Even if the case were to develop a few wear marks, it isn’t as if you’re dinging up a $100 watch. The Weekender is a bruiser on a budget, and we won’t hesitate to put it through its paces.

For the majority of consumers, we see this as an excellent multi-year option in the world of EDC watches. Its ability to play well with all forms of activities and wardrobes make it a solid go-to for daily use.

It’s easy to see why the Weekender is one of the most popular sub-$40 watches. Its uncomplicated, comfortable design and brand cache have vaulted it to the top of several “Best Budget Watch” lists.

Though it can be had on sale for just under $30, we feel that it is well worth its nominal price tag of $35. Our sole cost qualms lie in the loudness of the mechanism and the quality of its band, which we feel may fail under rugged use. That being said, Timex offers a wide variety of bands on the Weekender, many of which may prove to be sturdier than this one. And, in the world of budget analog watches, you’d be hard pressed to find something as stylish and reliable, volume aside. We consider its prominent tick to be a minor issue, though it may not hurt to take a trip to your local Target or Walmart. Hold one up to your ear and see what you think.

In the end, Timex has managed to put together a watch that is more than the sum of its parts. We wouldn’t hesitate to recommend the Weekender to folks just entering the timepiece hobby or even those who, like us, own several watches already.

Thanks again, Timex, for sending one our way.