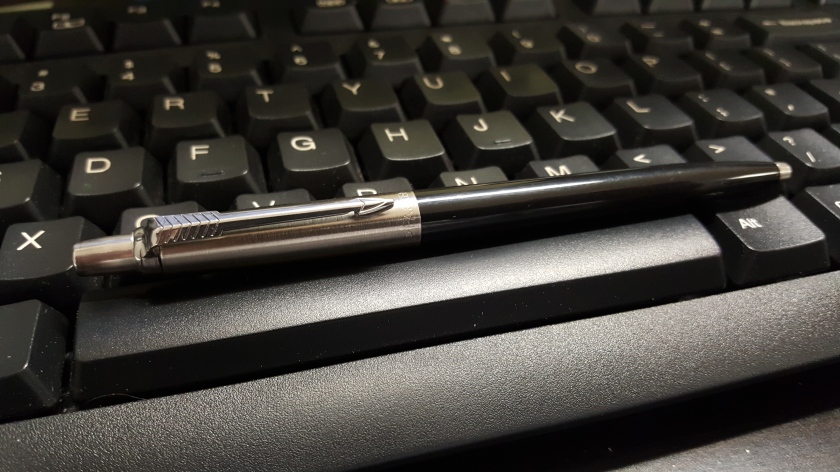 Perusing lists of the best bargain pens, we couldn’t help but notice the recurring appearance of the Parker Jotter. It’s been featured on such popular sites as EveryDayCarry.com, and its Amazon reviews are generally glowing. So when we stumbled across one in our local Staples, we decided to give the medium point marvel a shot. The results, as you’ll read below, have left us somewhat conflicted. Here’s our rundown on the base model of the popular Parker Jotter Ballpoint Pen.

The basic Jotter tells a tale of two very different halves. Let’s start at the top.

Crafted from stainless steel, the upper segment features a long deployment button above Parker’s signature arrow-shaped pocket clip. The brand name and logo are etched around the metal base, along with the country of manufacture (France, in our case). The brushed steel finish is quite attractive, and the arrow clip itself is nicely wrought. Its shiny and distinctive lines look excellent peaking from the pocket of a dress shirt. In short, we’re very pleased with the metal portion of the pen.

Unfortunately, the lower segment really lets the Jotter down. The smooth, black plastic tapers gently to its medium tip, leaving writers without a solid gripping surface. The narrow nature of this pen (approximately 0.5 inches near the tip) aggravates the problem. Users with even moderately sized hands and fingers will likely have difficulty gripping this pen, as we most certainly did.

So, while the overall appearance of the pen is strong, the Parker Jotter lets us down when it comes to the actual interface points of the tool. The arrow clip adds a full point to form, but the rest of the package is rather average. 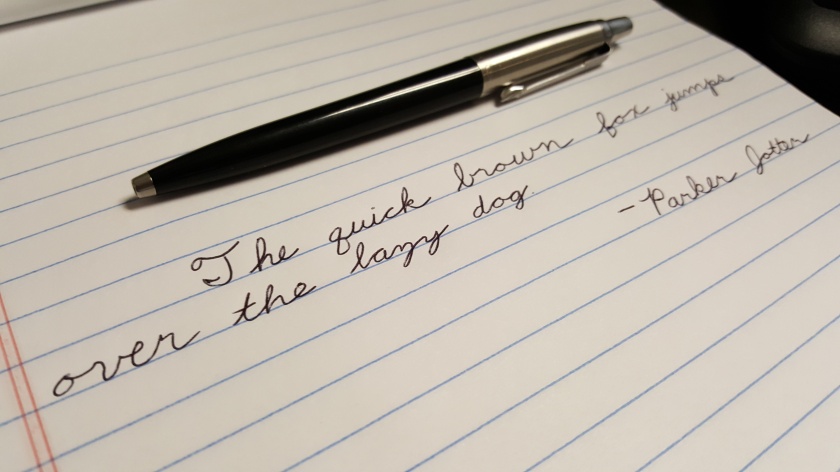 Upon deploying the tip, the button’s strong “snikt” gets you excited to set pen to paper. But once you do, the experience doesn’t live up to the expectation. We hate to say it, but writing with the Parker Jotter (again, the base model) is akin to writing with a standard disposable. The effort required to put a strong mark on the page is significant, requiring firm pressure and a deliberate pace. Its narrow barrel aggravates this problem, causing your fingers to cramp up after only a few lines.

For comparison, we tested this pen alongside a Pilot G2, a Zebra Z-Grip, and our Fisher Bullet Space Pen. The Pilot proved to be the easiest writer by far, with good grip and quick marking. The Fisher provided a better hand feel and slightly darker lines, though it was far more susceptible to spotting and smearing. The Zebra was also more comfortable to hold, though its stripes were the lightest of the bunch. So where did the Parker come out on top? Well, we like the button. And, though it requires a more deliberate pace, it did lay down some decent lines. The forced attention to grip and pressure also resulted in slightly better penmanship, but we’re not sure it’s worth the accompanying cramping sensation.

Overall, the Parker Jotter is a fine pen for quick notes, signatures, and scribbles. Those looking for a serious writing tool, however, will need to look uptown of the base model. We wanted so much to love this pen. But, every time we pick it up, we’re reminded why we don’t.

Other than its beautiful arrow clip, the Jotter doesn’t make a compelling argument for inclusion in our everyday carry. Yes, it looks wonderful riding in the shirt pocket, but its uncomfortable ergonomics force us to sacrifice function for form. The Jotter will likely be stored in our pack as a backup, especially once our new Lamy Safari arrives.

As dire as it sounds, we’re not about the throw the pen in the trash. It’s an attractive piece of work, just not a friendly one. We’ll use it, at least until the current ink cartridge runs dry. 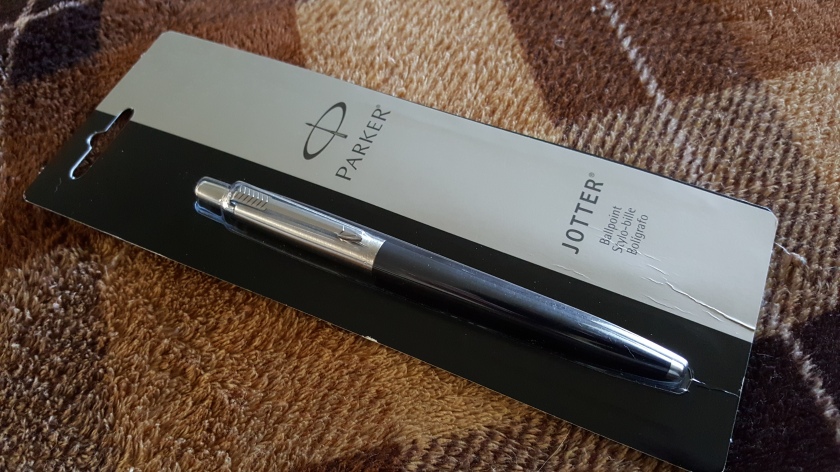 As we’ve said, this is the base model of the Parker Jotter. If we had it to do over again, we’d save the $10 and put it toward one of their versions in the $25-$30 neighborhood. Replacement cartridges go for just over $7 per six pack on Amazon, but the thought of going through that much ink with this pen makes our hands instantly ache. If you have small hands and are looking for a cheap, attractive pen, the Jotter may be your jam. For us, it was something of a disappointment. At least it looks nice.

Well, we have our first negative review on Journeywind Junk. It’s not a good feeling, but it’s an honest one. Yes, we know we’ve been hard on the poor Jotter, a pen that several folks swear by and love. But we think that Parker can do better. As such, we’ll be reviewing some of their premium versions of this same model in the future. Perhaps one with an all-metal barrel could solve some of our grip issues.