Large or small, the majority of Everyday Carry enthusiasts keep some form of flashlight in their daily kits. With our venerable Maglight Mini beginning to fade, Journeywind Junk decided it was time to move into the 21st century. Our new model, a ThruNite Ti3 CW, features a maximum output of 120 lumens from its cool white Cree LED. And, while our Maglight required two AAA batteries to put out useful illumination, the Ti3 makes due with one. Best of all, this one actually fits in our pockets.

Here’s our complete review of the ThruNite Ti3.

Right out of the box, the ThruNite Ti3 is an impressive tool. The sharp finish and knurled texture of its aircraft-grade aluminum hull feels as good as it looks, showing a surprising level of quality for such a small light. And, at just 2.8 x 0.6 inches (or 70 x 14 mm), the ThruNite Ti3’s small size proves to be one of its biggest selling points. It slides perfectly into the watch pocket of a pair of jeans, shown here next to a Kershaw 1980ST pocket knife. Even when sitting, walking, or running, this pocket combo remained comfortably in place without impeding our flexibility.

Much of the ThruNite Ti3’s user friendliness lies in its weight, or lack thereof. Unburdened with a battery, the unit tiptoes onto the scale at a minuscule 0.03 ounces (12 grams). Even with a standard AAA installed, it weighs about as much as a shot of your favorite beverage. This makes it a viable candidate for keychain carrying in the event that your pockets are already a little too crowded. ThruNite includes a clip and chain for just such a purpose, though we feel the light is a little long for this mode of transport. We prefer to store it in the aforementioned watch pocket.

The reversible pocket clip allows for a variety of carry options, including the ability to clip it to the bill of one’s cap. Other reviewers, however, have complained of the fragile nature of this particular component. We’ll say this – The pocket clip remained strong and springy throughout our test, but we can see how constant wear could cause it to fail. If you don’t overtax it with constant reversal or aggressive over-bending, the clip should hold up well. ThruNite offers a strong warranty, which we’ll cover in the Future section below.

The ThruNite Ti3 offers four modes for users to cycle through. This is accomplished by turning the light on and off in intervals of two seconds or less. From a cold start, here’s how the modes break down (along with their respective battery drains):

ThruNite literature refers to Strobe as a “hidden” mode, because you must cycle twice through the three main settings before it will activate. This occasionally conflicts with the built-in Memory function, which, in the space between two and ten seconds after turning the flashlight off, recalls the last activated mode and reactivates it with another twist. After ten seconds, users will find themselves starting over with Firefly. Still, the Strobe is a nice addition which could come in handy in emergency situations.

We spent most of our time in the Firefly or Low modes. The first of these is perfect for reading or finding your way through the house at night, while the second provides ideal light for taking the dog outside for a bathroom break. High mode saw use in the mornings and in the dark corners of a construction site, where it performed very well for such a compact tool. We’d recommend a bigger light for heavy industrial use, but that’s not really what the ThruNite Ti3 is designed for. In standard low-light situations, the ability to pull 120 lumens from your pocket or keychain is nothing to sneeze at.

A quick note – While we opted for the Cool White (CW) model, ThruNite also offers a Neutral White (NW) version. According to our research, the difference lies solely in the color of the light. Our chosen model throws a slightly paler illumination, where the Neutral version is supposed to shed a warmer shade. The difference is mainly one of preference, as both models feature identical specifications. 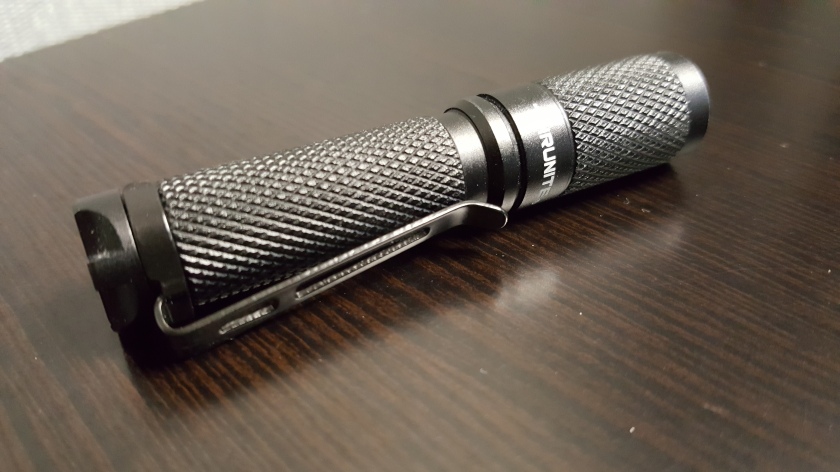 Let’s talk about the twist activation. While ThruNite states that the lack of an activation button allows for easier single-hand operation, we tend to disagree. More often than not, we found ourselves using both hands to cycle through modes and douse the light. You can still operate the ThruNite Ti3 with one hand, however, with a little practice.

To be honest, the ThruNite Ti3 is the first flashlight we’ve included in our everyday carry, and we were floored with its utility. From the jobsite to evening walks to reading in the dark, this small light offers bigtime utility. The black finish has acquired a few slight scratches from sharing pocket space with our knife, but these minor dings add a charming patina to the little fellow. And, despite our minor annoyance at the twist activation, we suspect that it will prove to be more reliable than a button which could stick or break.

We also compliment ThruNite on their power consumption. So far, we’re still on our first AAA. Some other reviewers have mentioned their fondness for rechargeable batteries, so we may experiment with that more eco-friendly option at a later date. There’s certainly time, as the unit’s Cree XP-G2 R5 LED is rated at 20 years of life.

Should anything go wrong, ThruNite offers a 24 month replacement warranty for all components, including the pocket clip. We doubt we’ll have occasion to use it, but Amazon users who’ve sent their products in generally give positive reports.

Bottom line – we’re smitten. The ThruNite Ti3 has opened our eyes to the world of compact flashlights, and will continue to light our way for the foreseeable future.

Hovering around the $15 neighborhood, the ThruNite Ti3 represents an incredible value. Its solid construction, excellent ergonomics, and multiple modes earned top marks during our test period. The ready availability and economical nature of its AAA power source provide another solid argument in its favor. Truth be told, we’re considering purchasing a second ThruNite Ti3. And maybe a third.