The Fisher Space Pen is something of an icon. With its ability to write at any angle under extreme conditions, it’s become one of the most popular items among those who care about the things they carry. We here at Journeywind Junk take our writing and our gadgets quite seriously, making the Space Pen a perfect fit for our inaugural review. For the purposes of this test, we acquired a dark colored Bullet model outfitted with the optional pocket clip. Here’s how the little guy measured up in our four categories – Form, Function, Future, and Finance.

The Fisher passes the hand/eye test with flying colors. It fits well in the palm, and its sleek look will draw compliments from those asking, “Excuse me, do you have a pen?” Just be sure to get it back, as its small closed size makes it easy to slip into a wayward pocket or organizer.

For a size comparison, take a look at the photos below. Included is a Pilot G2 (another very popular pen) and a quarter. When deployed, the Fisher is perhaps a quarter-inch shorter than the Pilot. Stowed, it tucks effortlessly into the pocket. Overall closed dimensions, per Amazon, are 3.8” x 0.3” x 0.3”. 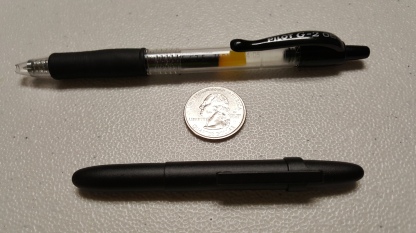 One of the best aspects of Fisher’s design lies in the pen’s weight. At just over five ounces, you can feel the solidity of its construction. The black matte metal feels excellent against the fingertips without taking smudges or prints. When deploying the pen itself, the cap slides into place with ease. Just don’t jam it down, as the metal-on-metal retention and slick finish could make it difficult to separate the two pieces once you’re done writing. A gentle joining of the two halves will hold the pen together, even if you find yourself using it to gesture at a rock, a piece of heavy equipment, or whatever else you’re drawing attention to. There’s also a small o-ring at the screw joint used to open the pen for cartridge replacement, and this helps keep the unit sealed together in your pocket.

Let’s touch quickly on the pocket clip. Fisher does sell the Bullet model without the attachment and, after using one for a few days, it’s easy to see why. The short length of the pen will cause it to sit high in the pocket when the clip is used, with the base hovering far above the floor of a standard shirt pocket. And, while not sharp by any stretch, it could also scratch or otherwise ding a cellphone screen. Even so, the clip adds an extra carry option, keeping the pen within easier reach. If you don’t mind the extra couple bucks, it’s a feature worth having.

If there’s a downside here, it’s that the heft of the pen and the hardness of its brass hull can cause some discomfort during an extended writing session. Consequently, you won’t find people filling their desk holders with Space Pens. But, that doesn’t seem to be what Fisher was going for. These writing instruments were made to stand up to the harsh realities of writing in the field, and they excel in that environment.

The Bullet Space Pen reviewed here ships with a medium sized, tungsten-carbide ball point. It writes fairly easily, requiring about as much effort as a standard issue Bic-type disposable. As shown in the photos, however, smudging and heavy spots do occur. You will get ink on your fingertips at one point or another, rest assured. The slightly above-average writing effort and middling precision hurt the score here. When sitting at the desk, we generally find ourselves reaching for a Pilot G2 as opposed to fishing the Space Pen out of our pockets.

Out in the field, however, it’s another story. With an operating range of -30 to 250 degrees Fahrenheit, the Fisher will write at temperatures where other, smoother pens would be either frozen solid or melting into a lump of inky goo. Its ability to put black to paper at any imaginable angle provides another strong mark in its favor. Paired with an all-weather notebook, users will be able to take notes as the world freezes, floods, or burns around them.

The Fisher will readily stand up to the rigors of work on a construction site, a mountainside, or the urban jungle. While your letters may lack precision, you’re generally guaranteed that they’ll take to the page.

The Fisher Space Pen has become a permanent fixture in our everyday carry loadouts. Ink is cheap and easy to come by (see the Finance section below), and it sits perfectly in the pocket. The metal case should hold up well to the rigors of industrial work, and the sleek design should prove to be timeless.

While $18 may seem like a lot for a pen that will spend more time in the pocket than in the hand, take a moment to think about what you’re getting. It’s a sleek, sturdy instrument that will write in extremes that, at best, would leave you very uncomfortable. Seriously, if lobsters could write, they’d use Space Pens to sign their last will and testaments. For folks working in difficult conditions, the Fisher is a screaming deal. So long as there’s ink in the cartridge, you’ll be hard pressed to find a situation where it won’t make a mark.

Speaking of cartridges, Amazon currently sells a three pack for just under $5. If you prefer to shop in person (or you unexpectedly run out of ink), single replacements can be found in popular office store like Staples and Office Depot/OfficeMax for less than $10.

Overall, this product represents an excellent blend of Form, Function, and Future , earning it top marks for value. 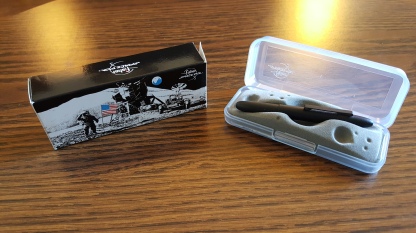